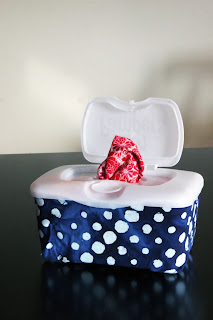 Old wipes boxes are wonderful, truly wonderful. If Mooglebean likes something she likes it 10 times more if she has to pull it out of a wipes box. Mylar tissue paper is a good example, she loves it and in the beginning she loved pulling it out of the wipes box. However, now that she is a bit older she likes putting it back in the box too.

One day while at the fabric store I saw all the beautiful patterns available in quilters' squares and had a brilliant idea. I sewed squares of fabric to one another end to end like a magician scarf and put in the box so now when she pulls the red scarf the next is orange than yellow and so on. Mooglebean was about 9 months old, sitting well, crawling but not walking yet. 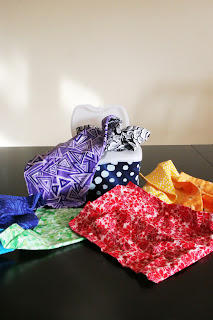 This toy can teach cause and effect, fine motor control and promote curiosity. By using the colors in rainbow order it could also be used to teach the colors later on and by having each fabric have a different pattern I could teach patterns. I was so proud of myself and the toy that I made...

Mooglebean was terrified of it. Seriously, her little bottom lip would quiver and she would burst into tears  every time I tried to show her how it worked. We figured out that she most likely didn't understand how the fabric coming out of the box seemed to her to fly out and get bigger than the box. I left it out if she wanted to play with it but never played with it myself. Over time she became more and more interested in it and now loves to pull the entire thing out of the box as quick as she can and look at me like "That was fun Mommy, now put it back so I can do it again." 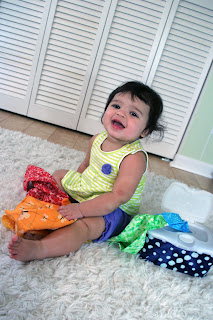 Posted by Alyssa Chowdhury at 4:06 PM